Anta Sane hails from Senegal, West Africa and is a doctoral student and graduate assistant in Political Science at 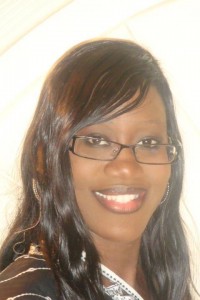 Howard University in Washington, DC. Her areas of concentration are Public Policy/Public Administration, International Relations and Comparative Politics. She is also teaching at Washington DC Community College and is the Director of Operations of an online English and French magazine for the African Diaspora called Jamati. Her areas of interest are Women in Politics, Gender and Governance and Economic Development.

She is a graduate of Pfeiffer University in Charlotte, NC. She has dual Master’s degrees in Organizational Leadership and Change and a Masters in Business Administration concentration in Finance. Her undergraduate degree is in Communication Studies from Suffolk University in Boston, Massachusetts, coupled with a minor in Black Studies.  Ms. Sane’s professional career encompasses a diverse exposure in banking sales and service where she held different positions ranging from Personal Banker to Branch Manager. Her performance evaluations have earned her several “Play Like a Champion” awards.

She has been also nominated for the “Who’s Who Among Students in America.” Her humanitarian work includes an internship with The United Nations Population Fund agency in Dakar, Senegal, where she wrote an article about world population day in the United Nations Newsletter, and an advocacy plan to prevent maternal mortality. Ms. Sane has also represented the UNFPA to the National Assembly of Dakar, presenting a bill regarding health reproduction, sexual health and family planning. Anta has served as Northeast Regional Representative and Vice-President for Administrative Affairs for NBGSA.